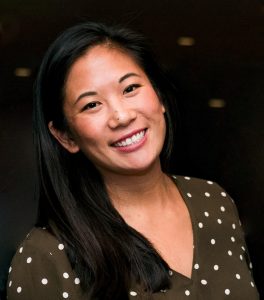 Courtney’s love of diversity drew her to big cities where she felt comfortable and found new opportunities to explore.

While at college, Courtney had an opportunity to participate in an improv comedy workshop. She was immediately hooked!

Eventually she participated in Comedy Sportz in San Jose. (There are over 28 cities with independently licensed ComedySportz organizations). Her team building skills and love of improv comedy grew. She learned improv comedy benefits those on the stage as well as those in the audience. These fast-paced, upbeat events proved to be fun, energetic, and transformative for all ages and backgrounds.

By this time Courtney had a career in hi-tech working with startup companies. In 2016 Courtney decided to take a bold move to open her own Comedy Sportz  business in the Boston area.

In May 2018, she leased a space and renovations were underway with her team to create the current Rozzie Square Theater .  At that time there wasn’t any improv comedy in the Roslindale neighborhood. Courtney f

ound the residents very welcoming to her and her team.

Courtney attributes her inner strength to do what is right, in the right moment, to her experience that “improv is a team mentality.” She is a living example of the Comedy Sportz motto, “Not me tonight, us over time.”  Providing an inclusive, safe environment for others at her theater is key to her decision process.

On a November evening in 2019, warning bells started to go off inside her while a male comedian was giving a performance to a predominantly male audience. The dialogue he used was racist, misogynistic, and denigrating toward women. Yes, she had heard this kind of language before. However, this time was different. This was her theater and her business where the inappropriate behavior was occurring. It was contrary to the safe atmosphere she was determined to create in her community. She knew it had to stop and stop now. Courtney politely rose to the stage, told the comedian “No thank you,” that this was not for them, and asked everyone to leave.  She gave the audience refunds as they left the theater.

Little did she know that her life experiences were about to explode. After the incident, she spoke with a couple of men from the show. They didn’t understand why she shut down the show. She did her best to explain the situation to them that our culture has allowed male comedians to use offensive language and gestures demeaning to women.  Even if women walked out, nothing changed. To her knowledge, action to shed light on these situations was absent.

Later that evening Courtney reflected on the conversation with the men and felt compelled to share her story on Twitter and Facebook to help others understand the need for change.  Her intention was that if other women heard her story, they would feel less alone, and they too would start saying “No thank you.”

It didn’t take long for hateful threats to be thrown at her and her theater.

Some of the threats rose to such a level that the local police department was notified.  Courtney wasn’t expecting this kind of attack.  It was a scary, difficult time for her.

An amazing amount of support arose from her improv team, family, and others around the country to back Courtney following the onslaught of hate she endured. Her dedication to her team philosophy “Not me tonight, us over time,” makes her stronger, in spite of unwelcoming circumstances.

Thank you, Courtney for your courage to