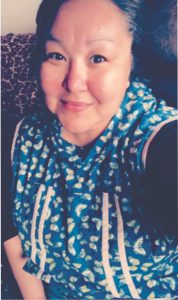 Clarice Leota Hardy is an Inupiaq Eskimo woman born in Nome, Alaska and raised in Shaktoolik, Alaska. Growing up on the Bering Sea coast in Norton Sound provided Clarice a strong sense of community and a reservoir of good memories. Her time spent with family and community in subsistence activities, sports and searching the beach for treasures are cherished. Clarice is affectionately know by her friends as “Bun” and “Auntie Bun” by her nephews, nieces and young children in the community.

Living off the land and helping the next generation appreciate local natural foods are important values for Bun. Some of her traditional subsistence hunting and gathering activities include preparing and/or gathering whale, seal, fish, herring and wild bird eggs, roots and berries.

In high school, Bun developed her basketball and life skills. She loved practicing and working with her teammates to become successful. By her senior year, she lead the Shaktoolik Wolverines to the Alaska State Championships, finishing second and leading the team with an average of 31 points per game. One of the highlights of playing on the Wolverine’s Basketball Team was the joy she found traveling and making new friends both on and off the court.

Bun loves walking the beach and finding beach glass. Her finds nurture her artist side which she transforms into unique necklaces. According to Bun,“Walking the beach is like a treasure hunt. You’re finding a part of your history, a part of your roots, where you came from, how your people lived back in the days. It’s very cool.” Her mom introduced her to the beautiful beach when, as an infant, she rode on her mother’s back, often falling asleep to the rhythmic melody of the wind and the waves.

Bun taught preschool for Montessori Schools in Anchorage, Alaska and then dispatched airplanes for seven years with Era Aviation, also in Anchorage, before accepting the position of Dispatcher for the Nome City Police Department in May, 2015. She was excited about the job because Nome was closer to her hometown of Shaktoolik and is her father’s home town. She wanted to be able to help the people in the community.

Over the past decade, reported sexual assaults in Nome have been six times the national average. Many of the reported assaults have not been investigated by the police department, Bun’s case included. This results in victims’ reluctance to report an assault if their perpetrator (who often continues to live in the community) suffers no consequence. With a lack of justice for victims, the cycle of sexual violence has become way too common and accepted by some as a cultural norm.

Bun continued to inquire about her case. In doing so, Bun risked her safety, her privacy and her job. Her struggle to find justice through the police department had challenged her faith in the system of law.2 Bun credits her inner courage from her mom’s early lessons: “To do the right thing and to speak up with the truth.”

Even after authorities lied to her, Bun again filed a report, asked questions and shared her story publicly. She eventually filed suit in February, 2020, in the US District Court of Alaska with the support of the ACLU of Alaska.3

In spite of experiencing extreme trauma, stress, and loss, the spring of 2020 has been a positive transition for Bun. Participating in the traditional subsistence gathering and

hunting with her family has proved to be very healing. In addition, by volunteering to help organize games, tournaments and open gym for her community she is making a positive difference for the future of her community.

Bun is grateful for her traditions and her family. Having the opportunity to spend time with her nieces and nephews has been very rewarding and encourages her to keep going.

She does not want anyone to experience what she has and it makes her even more determined to seek justice and hold the police department and perpetrators accountable.

As she said in her statement to the media on February 20, 2020, “I can’t undo the harm done to the hundreds of other women the Nome Police Department failed to help. But maybe I can stop this from happening again. Maybe that is my purpose.”4

While she still misses her friends and family camp in Nome, her new path is making a difference for other women. Quyanna (thank you – Inupiaq Eskimo), Clarice Leota Hardy, for your daring and persistent courage to seek justice and to bring public awareness about your personal experience. By being a positive role model for women you continue to encourage others to speak out, demand equal justice for all under the law, and forge a path to a more equitable world.

“I have been reliving trauma for the last five years, but not for nothing,” Hardy said. “My hope is that the City of Nome stays true to the promise made in the apology and that it follows through on measures to ensure what happened to me doesn’t happen again. More importantly though, I hope that hearing Nome take accountability for what happened helps the hundreds of other people who suffered by similar circumstances heal.”

1- Hardy vs City of Nome Complaint

“Bun Hardy is an Inupiaq woman. She is a champion for Alaska Native women, in bringing awareness to the issue of sexual assault and the need for improved response by public safety. She is a survivor. She has transformed her personal healing into advocacy and policy change for all survivors. Her voice has allowed for many survivors to have courage, step forward, tell their stories, and to seek justice. In the face of systemic and institutional racism, advocates have found strength from Bun’s courage. Quyaana (Thank You) Bun.”
Lisa Navraq Ellanna, Katirvik Cultural Center Director

“I thank you Bun Hardy for choosing not to be quiet.”
Deidre Levi, Sexual Assault Survivor

If you or someone you know has experienced sexual violence, please reach out.

or Visit: https://49rising.com/alaskan-organizations   For resources by communities